Battery storage systems have been in use for many years in applications such as control and instrumentation back-up supply for industrial plants, large computer systems and regional delivery vehicles. Traditionally in these systems the batteries have been the lead-acid type with recent migration to gel type and Nickel-Cadmium batteries based on performance and energy density. 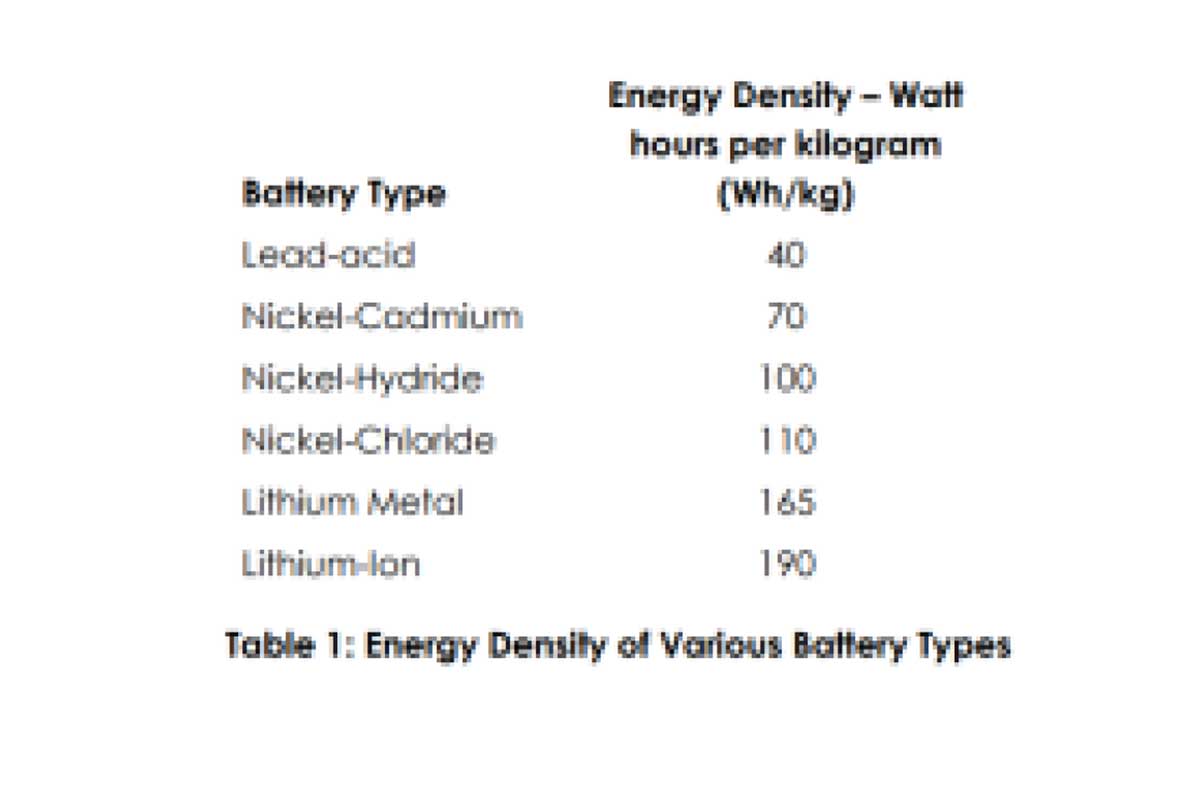 Recent developments have focused on increasing the energy density for both volume and mass, thus improving portability with a rapid growth in cordless communication devices and power tools.

Table 1 shows the energy density per mass of various types of batteries. The main limiting factors in the transition to electric cars were the large mass of the batteries, their limited range and their long recharge times. Tesla have been on the forefront in addressing these problems and have achieved good results, mostly from use of Lithium-Ion batteries which have a high energy density. 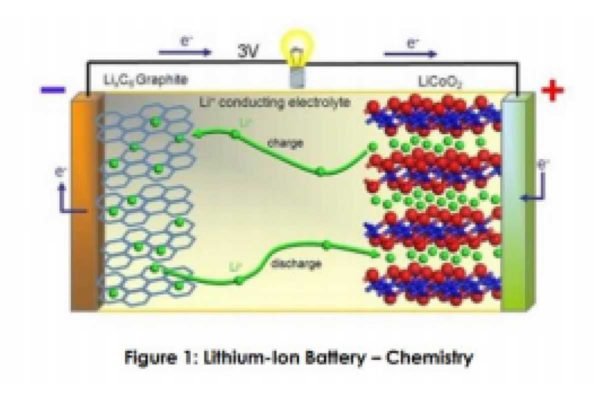 To achieve the highest energy density the area of the anode and cathode electrodes needs to be maximised with only a small distance between them filled with electrolyte. The anode and cathode electrodes are stacked alternatively to form a laminate with electrolyte gel/film between each layer. In some applications it is ideal for the laminate to be kept as a slab shape (mobile phones). In most applications however the laminate is rolled to form a cylindrical cell with electrodes forming concentric tubes (Figure 2). 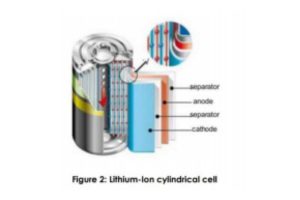 Laminate is encapsulated in an aluminium casing and sealed to prevent ingress of moisture, leaking of chemicals or venting of vapours. Cell sizes are normally the standard AA size battery type and wrapped per photograph 1. Photograph 2 shows the Lithium-Ion Cell Partially Dismantled 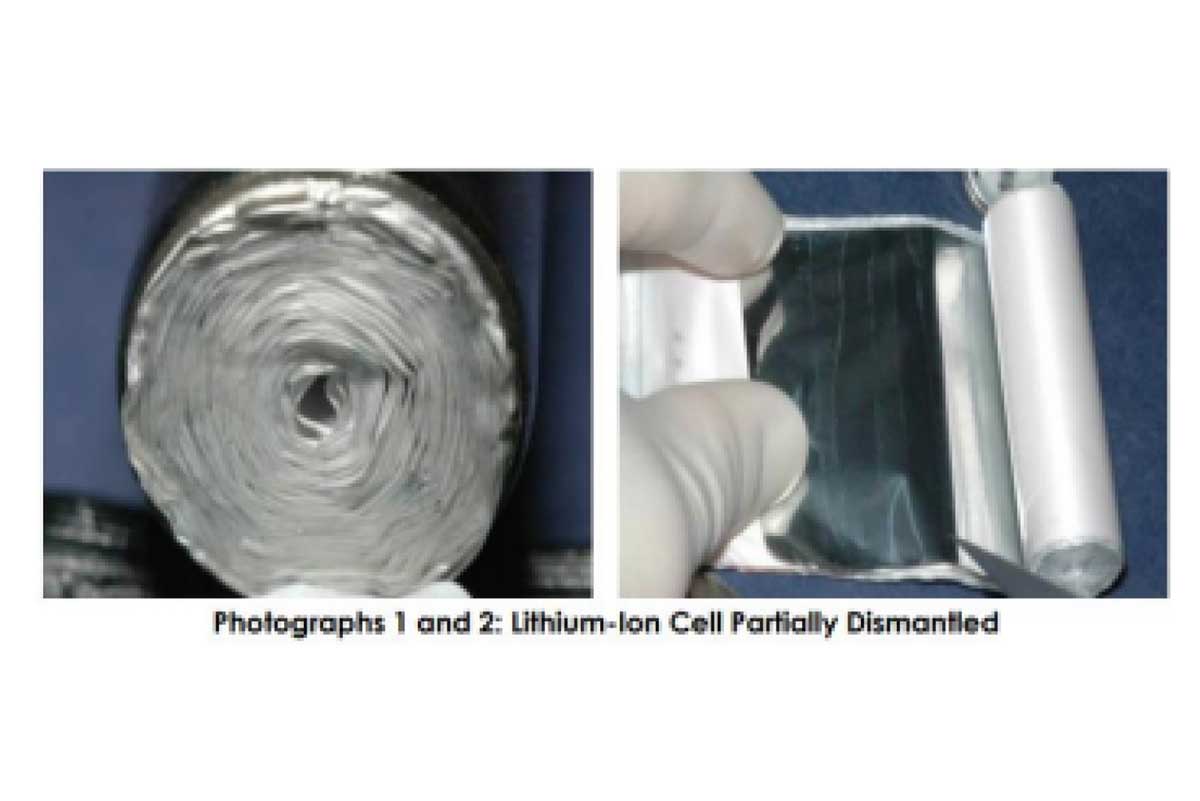 A battery is a single stand-alone self-contained energy storage unit which is made up of one or several cells. The voltage at which each cell produces electricity is a function of the chemical reaction therein and varies between 3.3 V and 3.7 V.

The amount of energy stored in a single cell is limited so to increase energy capacity and to supply electricity at the required voltage, cells are connected in parallel to increase storage capacity and in series to increase voltage.

Various configurations are used to optimise the size of the battery, allow for heat transfer and cooling. In some cases, a large heat sink is incorporated to allow for cooling via convection or a network of tubes containing a cooling medium (Figure 3). 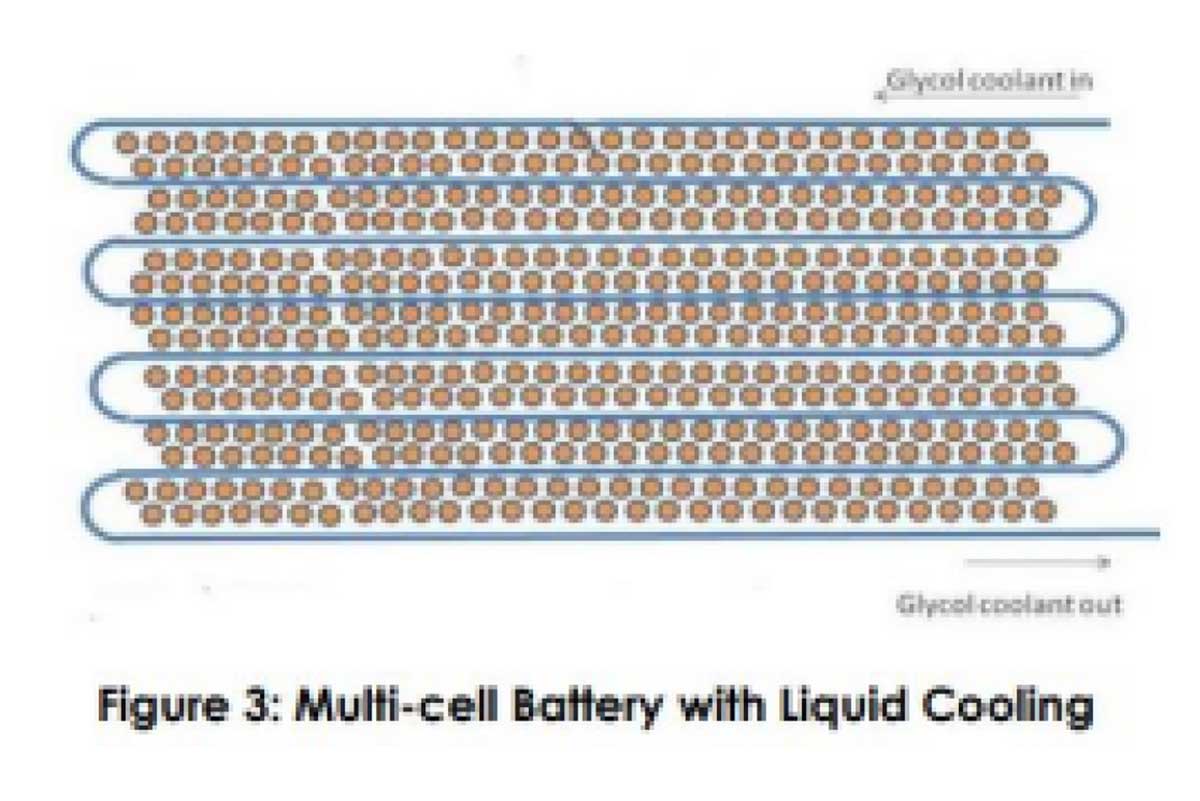 Cell pods are assembled in series or parallel arrays with a liquid cooling system and encased in a waterproof steel enclosure which are the smallest individually replaceable units. DC voltage is nominally 400 V with an energy storage capacity of approximately 10 kWh.

Each cell is encapsulated in an aluminium casing. If the casing is ruptured, spillages can have both corrosive and flammable properties. Should the electrolyte ignite, gas emissions are also hazardous. Generally, these risks are relatively low as the individual size of each cell is small. Heating in the battery is caused by:

Short circuit can lead to the condition of thermal run-away, where cell temperatures increase rapidly or hot-spots form. Materials used in the manufacture of cells are generally stable up to 80 C, after which further chemical reactions continue to generate heat and eventually ignite.

The lifespan of Lithium-Ion batteries is finite and with each cycle there is thermal cycling, ultimately leading to a reduction in life. Factors that can reduce the life of the battery are:

Batteries need to be constantly energised even if they are not charging or discharging and thus will be a consumer of electricity. Battery life depends on operating modes, cycle characteristics and operating practices which can be affected by extended shut-downs without the batteries being energised due to a DNO network failure.

To ensure battery health, all battery packs have protection to prevent over and under-charging and in the event of high temperatures the battery pack can be de-energised. 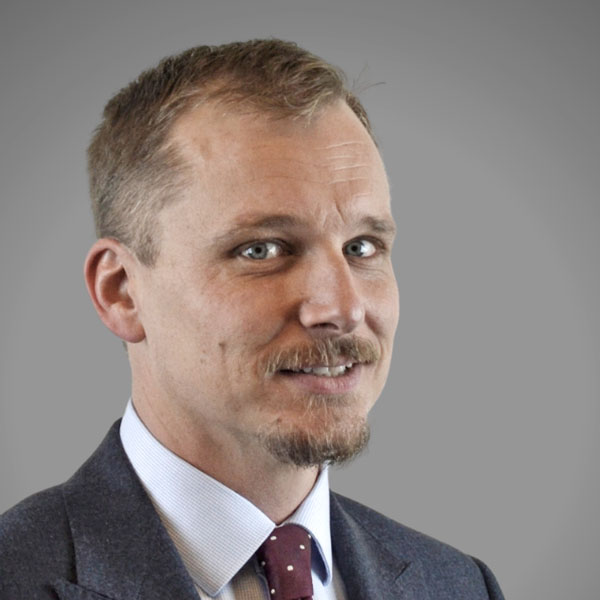 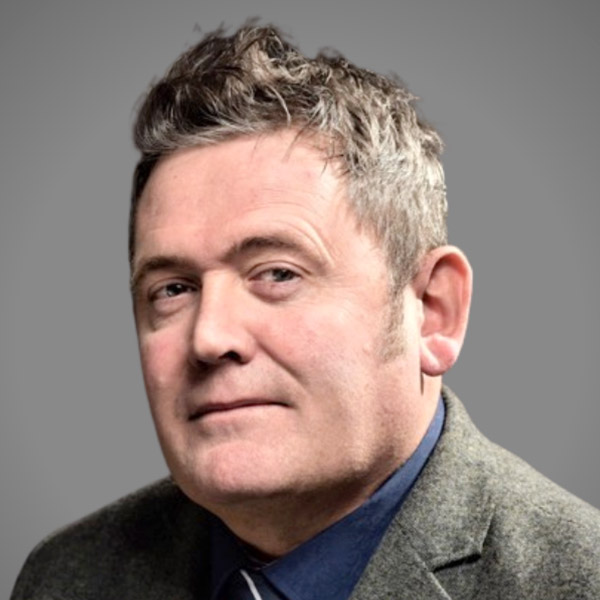 Paul Toon, who joined GRS in 2021, has more than 25 years’ experience in loss adjusting. He is a Chartered Consulting Engineer and Project Manager, and an expert in renewable and conventional energy losses, oil & gas, petrochemicals, and construction & engineering claims. During his career, he has handled complex and technical claims throughout the United Kingdom, Europe, the Middle East, and other regions. Paul also has been involved in large projects in the petrochemical, oil & gas, and pharmaceutical sectors, where he has led teams on turnarounds, equipment upgrades, and replacement.

Before joining GRS, Paul was a senior engineering consultant at Advanta Global Services and managing director of PWT Consulting, an engineering and loss adjusting firm doing business internationally. Prior to that, he held engineering and management roles at several global claims companies. He has an honors bachelor’s degree in mechanical engineering from Northumbria University and is a member of the Chartered Institute of Loss Adjusters.