As I watch the insurtech space, I see a fair bit of hype around disruptive technology. Some of what I see reminds me of the dotcom boom of the late 1990s. Then, as now, lots of startups promise to deliver something ground-breaking, and all are competing in the same space, with many of the same ideas.

To put this into perspective, let’s look at the global claims loss pyramid. This pyramid is a simplified model that segments claims into four main types. The base layers of the pyramid — representing technology-driven and networked services, and low-value, high-volume claims – are where technology-enabled offerings can be effective. Technology also is beginning to flow into the level above those, where higher-value and more complex claims reside. The top of the pyramid is large complex claims, which are the most technically challenging and require highly experienced loss adjusters. Aligned with these levels are the requirements for claims talent and experience; base-level claims only need basic skills, whereas the top of the pyramid requires the most advanced skills. 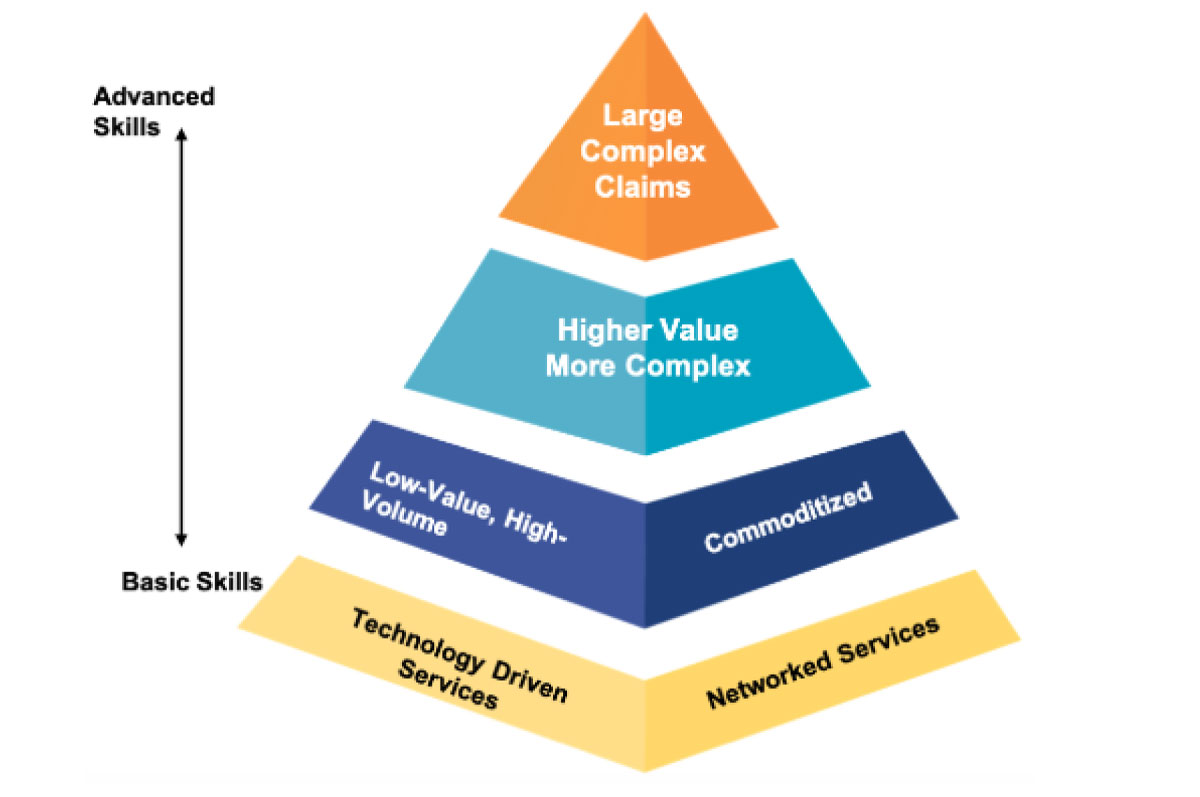 At the moment, the insurance industry is aware that the claims experience is often the only contact a policyholder ever has with the insurer, so the claims journey must be completed correctly. Around the world, policyholders are demanding the same amount of transparency and oversight in the claims process that they get as consumers when they order something from Amazon or another online retailer. Many personal lines policyholders expect to be able to track and interact with their insurance carrier via an app or mobile portal.

Similarly, if they have an app to see their policy details, renew coverage, etc., then consumers expect to be able to make a claim in that app and track or manage it to completion. It is apparent, though, that many prefer a mobile portal because they rarely make a claim and don’t want to install an app they may never use again. They don’t want to have to remember login details for the portal, so they need an encrypted link that will take them straight to their claim, just like a FedEx tracking number. They expect to be able to communicate with all parties via the portal using messaging, not email, but if they need to send in photos or documentation, they may transmit those through the portal without necessarily knowing or caring who is handling the claim.

For large complex/technical claims, however, policyholders and other stakeholders have different expectations as to how their claims are handled, and how the communication works. Many insurtech startups don’t seem to differentiate in this claims segment – to many of them, “a claim is a claim.” In some cases, they clearly don’t understand the distinction between simple, low-value claims with repeatable steps, and larger, more complex claims where multiple, detailed narrative reports are needed to settle the claim. Either that or they have chosen to focus in the volume claims space for commercial reasons. Large complex claims are expertise-driven. Technology can support highly experienced adjusters, but technology for the foreseeable future will not replace the skill sets or expertise needed on such claims.

A few of the new breed of software-as-a-service (SaaS) claims systems put the insured front and center in a collaborative claims process. The vendors say they can handle just about any type of claim, but they are only good for personal auto, volume and third-party administrator claims. Liability claims often entail complex sets of facts and negotiation, beyond the scope of most vendor offerings. The vendors also don’t offer client-driven SLA tracking, document management, co-insurers, multi-currency or billing capabilities. They assume that a claims manager overseeing a $10 million warehouse fire will trawl through an app on the phone to see status updates. Client-driven SLA tracking, such as through dashboards, is important for clients to make sure their claims are handled in the correct way. Vendors and their advisers need to understand their market better.

Lots of insurtech startups are focused on the easy part of the equation – signing up policyholders via chatbots, submitting claims and using artificial intelligence to settle simple claims. Many startups are creating chatbot apps to sign up domestic policyholders and allow them to submit a claim. Every insurer will have this capability soon, as it is simple to build using third-party AI services, so I don’t see this as a market differentiator. We do not see a new breed of agile SaaS claims systems coming to market yet, probably because that is a more difficult system to understand and build. There is also resistance from some suppliers to handing their data and claims process over to a third-party SaaS provider. I haven’t yet seen one of these new-breed claims systems that is built around SLA-driven workflows that drive the claim to completion, though I am aware of some in development, none could support a traditional claim adjusting business. What some vendors are currently offering is a claims-light system, focusing on collaborating with the various stakeholders via portals and apps instead of email.

In the past, suppliers such as outsourced claims management organizations would each build their own systems to fill these gaps, often because insurers either didn’t see value in owning the claims system or couldn’t successfully bring their own solution to market. This multitude of external systems and processes doesn’t serve policyholders well, because it doesn’t always provide a consistent, positive experience when they make a claim. If I am a homeowner policyholder with ABC Insurance, then I should have an ABC Insurance app on my phone that I can use to manage my policy and any claims arising from it, including all communications with whoever is handling the claim. I should expect any outsourced provider or supplier to be plugged into that same system, either because they are directly using the same system or because their own systems are linked into it via an API.

Traditional insurers need to re-evaluate how they outsource their claims to a third party because they continue to risk getting disintermediated from their relationship with the policyholder when so much of the claims process occurs outside their organization and systems. They should guarantee a great customer experience when a policyholder makes a claim, and to do that they need to control the collaboration space — the communication and data-sharing piece. Other financial services organizations have already solved this problem for the same reason: to reduce customer churn. Traditional insurers should be able to get this right, but many will need to become more agile in the way they deliver technology to do so. In the meantime, new entrants are launching with systems that already provide their policyholders with a better, more seamless claims experience. I’m not sure how well their systems integrate with external suppliers yet, but I suspect they will get there quickly because their organizations and systems were designed from the ground up to be agile and innovative.

Much of the above is already being discussed within the industry. I focus on the claims systems piece because I have been involved in many of these systems over the years, and it is interesting to see the same ideas come up again and again. We were talking about the “shared electronic claim file” in the early days of the internet. Now we are talking about a “collaborative claims workspace” decades later.

I am confident that the technology available today will solve these long-standing problems quickly. I have been involved in discussions with low-code development platforms, and it is incredible what companies can now build and deploy for web, mobile and desktop in a couple of months. At this pace of innovation, advancements in claims technology will bring the industry to a crossroads. Will the industry embrace the opportunity to transform its service through the claims experience? Time will tell. 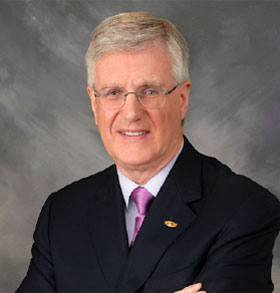 Jeffrey T. Bowman is the non-executive chair of Global Risk Solutions, a leading provider of a diverse range of claims adjusting and environmental risk management solutions.